The Origins of Pavey Law LLP

Our law firm is named after Don Pavey and Brian Law. While it has used that name since the fall of 1995, the firm continues law practices that trace their roots back to the mid-fifties in the City of Galt and to the early thirties in the Town of Preston.

Community leadership and involvement have always been an important part of practicing law at our firm.

Don Pavey was born during the second world war in Revelstoke B.C. His Dad was stationed with the RCAF in Iceland and his Mom had returned to her home town. Don grew up in the Applewood Acres section of Mississauga. After studying at Western University Law School, Don articled in Toronto with Tory’s, a large firm in the late 60’s with all of 18 lawyers. Following the Bar Admission course, he worked in Toronto for 6 years at Wolley, Dale and Dingwall. During that time Don completed his Masters in Law at Osgoode Hall specializing in Corporate and Commercial work. Don and his wife Libby came to Cambridge in 1975 with their two young daughters. Don joined the firm Copp & Cosman.

Brian Law was originally from Montreal. Following his Dad’s career moves, his primary school was completed in Rosemere, Quebec and his high school in the Lorne Park/Clarkson area of Mississauga. Brian did an undergraduate degree in Politics and Economics followed by a law degree at Queen’s. During his articles with a firm in Thunder Bay, he was responsible for the firm’s branch office in the Town of Red Rock, which made him the only lawyer or “near lawyer” on the north shore of Lake Superior. While at Queen’s, Brian was fortunate enough to meet and subsequently marry his wife Mary. During the 1976 Bar Admission course, a job with a Cambridge firm named Pettitt, Schwarz was the first posting on the job notice board at Osgoode Hall. Brian and Mary moved to Cambridge in the spring of 1977. Following four years at that firm, Brian established his own sole practice specializing in litigation. One of his major sources of work was referrals from Don Pavey 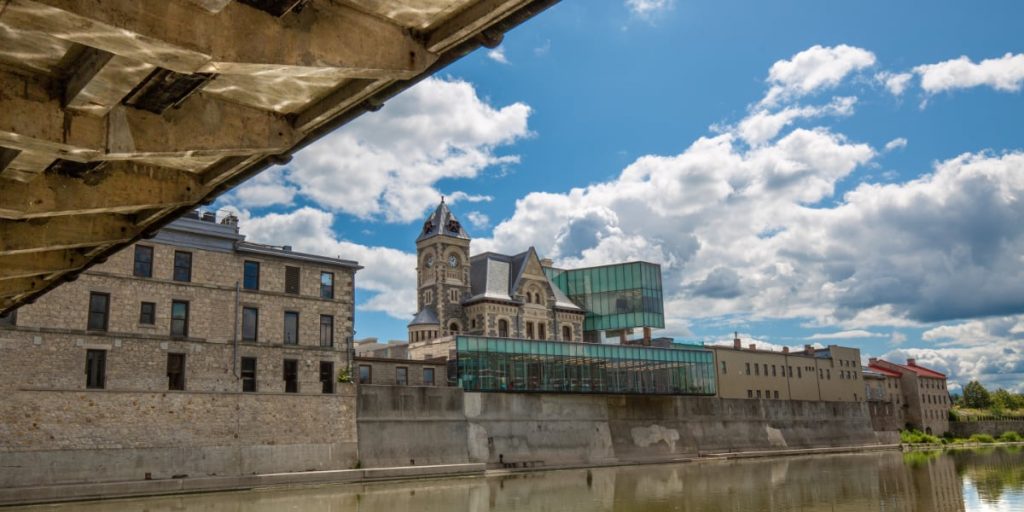 In 1984, the practices merged under the name Copp, Cosman, Pavey and Law. At the time the firm’s offices were on the second floor of the former Galt Men’s Club at Dickson and Ainslie Streets. In 1988 we purchased, renovated and moved into what had been the Knights of Columbus Hall on Cambridge St. and we are still there!

In 1995, Don and Brian continued the practice under the Pavey, Law name. In 1996, we merged with the Pearson, Flynn firm from Preston. That firm traced its roots back to the early thirties when it was initially established by Lida Pearson, one of the first women lawyers in Ontario.

We have also had a number of young lawyers work with us for several of their first years of practice. Amongst this group, Stephen Witteveen joined the firm in 2001 and has continued his practice of Corporate and Commercial work since then. Stephen became a partner in 2006. Our family law partner, Luba Yamoah, joined us during her second year of practice in 2009. She became a partner in 2014. In 2015, our partner Meagan Swan joined us. Prior to settling in Cambridge with her young family, she was a litigation partner at the Toronto firm Fogler, Rubinoff LLP.

Don and Brian were both involved in community leadership positions throughout their careers. Don was active in the Provincial Juvenile Diabetes organization, in the Cambridge Kiwanis Club and has for more than 20 years organized the Tour de Grand bicycle ride. Brian has been involved in the Y, both at a local level and nationally. He has served on the boards of Cambridge Big Brothers, the Cambridge Chapter of the Canadian Cancer Society, the Cambridge Social Planning Council, the Galt Country Club and the Cambridge United Way. For many years he was the manager of his sons’ travel hockey teams. Community leadership and involvement have always been an important part of practicing law at our firm.

Don retired in 2006 and Brian retired in 2017, both following 40 years in practice. Both continue to live in Cambridge. Don still uses the firm’s board room for Tour de Grand organizational meetings. Brian still drops by to get a free cup of coffee and to answer our endless questions about legal strategy.